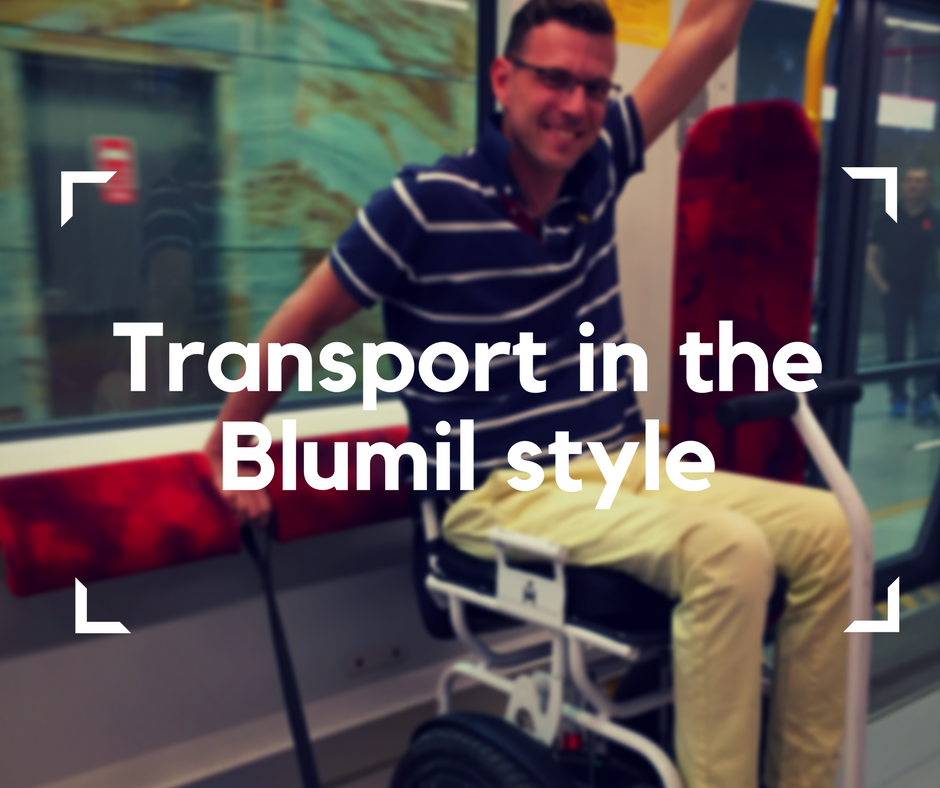 Transport in the Blumil style is easier than many people would think. Since Blumil’s light and small, it is a perfect electric wheelchair for public transport. Subway? Checked. Motorboat? Checked. Train? Checked. Airplane? Checked.  Finally… the car – checked. Everyday commuting can become faster and less stressful if one has a Blumil wheelchair and that’s something I can vouch for. I am a great believer that to live is to experience freedom and Blumil’s a material proof of my philosophy. Why? Mainly because it was created to defy the limits. How does transport look like in the Blumil style? How can Blumil itself be transported and what’s the lift to freedom? More about it below!

Public transport and wheelchairs in one sentence? Possible. Although not every city is accessible, and not every wheelchair can be easily transported, in many cases wheelchair users can use public transport with a relative ease. The best transport system I’ve ever encountered is – unsurprisingly – in a wonderful city of Gaudi – Barcelona. Since I’ve started using Blumil, my experience with public transport has become considerably better. Light electric wheelchairs are definitely city friendly – I have been proved that many times over the last few years. What type of public transport do I use with my Blumil?

Trains are often the most convenient and fastest connections between cities and sometimes I use them for the best comfort of travel. Generally, wheelchair users are entitled to assistance getting on and off the train. Informing the staff about your journey beforehand would make everything easier and faster both for you and the workers. Since Blumil is light and can easily change its position, traveling by train’s comfortable – provided the train’s accessible and in a good condition, of course.

I have traveled by plane so many times in my life, I know every single procedure by heart. Since I use my Blumil electric wheelchair, navigating airports has become a piece of cake for me. Due to its relatively small size, transporting Blumil doesn’t present itself as a challenge. Blumil and airplanes? Match made in heaven! Important note: just like in trains, you’re entitled to assistance getting on and off the plane. Moreover, you should be given assistance during your check-in process. As knowledge’s your armor and information is the key, it’s important to know your traveling rights.

Motorboat is a great fun and Blumil can be easily transported like this. Time to conquer the sea!

Subway is very often the fastest way to explore the city so I am proud to say… Blumil’s well equipped to commute by subway. In Warsaw where I live, I occasionally travel like this and it’s definitely the fastest way to get to the other side of the city.

As much as I have nothing against traveling by public transport, I find cars more comfortable and convenient. Because of that, I added a customized lift to my car. That was a great decision, as now I can commute with easy, and all I needed was a hook. Sounds good, right? The Blumil company doesn’t sell lifts, but there are many great products on the market, and the variety of choice is satisfying.  Below videos of transporting our Blumil electric wheelchair!

In conclusion: Blumil and public transport go together very well. The reign of wheelchairs too heavy or big to navigate the city are over. With an electric wheelchair which is both light and elegantly small, everyday commuting is easier than ever. Wherever you want to go and whatever your choice of transport is… Blumil’s ready to join you. To experience freedom is to defy the limits – something Blumil excels at.